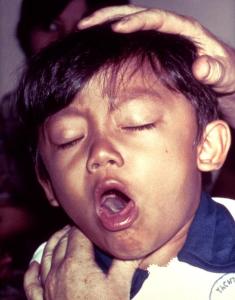 It all started with a Facebook post in a forum named “Unvaccinated America”. A mother, claiming to be an “educated Registered Nurse”, reports she suspects her 3 month child has Whooping Cough (pertussis). After listing unsubstantiated, ineffective folk cures she’s tried (butter, oil, fermented cod liver, etc.), she asks THE INTERNET for advice on treating her child.

The obvious question here is “shouldn’t she have taken the baby to a doctor?” If you have time to shop for fermented cod liver oil while your child is dying, is a side trip to the doctor an inconvenience?

But it gets worse.

The mother proudly reports that she has never had her child vaccinated. Sadly, the first and best line of defense against Whooping Cough IS vaccination. The vaccine is safe and effective (see CDC recommendations in references at end of article). This illness could have been prevented. And a serious illness it is:

Whooping Cough is a highly contagious disease caused by a bacterial infection. Bordetella pertussis is the culprit. The bacteria’s effect on the body is violent coughing, often to the point that breathing becomes difficult or impossible. In children under the age of one, such as the baby who’s the subject of this article, the disease can be fatal.

It’s estimated that around 200,000 children die each year from Whooping Cough out of an infected total of 16 million. In the 12 year period beginning 2000, 255 children in the USA died from the disease. All but 34 of those were under 3 months old. Remember, the baby discussed in this article is three months old.

Half of babies who get Whooping Cough require hospitalization. 25% of those will get pneumonia, a second highly dangerous disease. Seizures and brain damage are common outcomes.

But it gets worse.

In the case of our endangered baby and the Facebook plea for help, ENTER “MR G.”, a self described “Doctor of Chiropractic”. If you thought that the mother was endangering her child with snake oil — err, sorry — fermented cod liver oil —was bad, Mr. G. makes it worse. Rather than recommending the proper treatment, which is immediate hospitalization and treatment with antibiotics, our friendly, misguided chiropractor takes us on an irrelevant journey of the nervous system, suggests removing sugar from the baby’s diet, and — by all means — get the baby to a chiropractor as soon as possible!!! And friends, wouldn’t you know it, Mr. G. just happens to have the name of a good chiropractor he can pass along if the mother will just private message him.

I’m sorry. Get the baby to a chiropractor?

At the risk of sounding melodramatic, perhaps a trip to the undertaker would be more appropriate. This baby is in the highest possible risk group for fatalities and is being denied every known working treatment. Will it even be alive tomorrow?

CREDITS
1. Images of screen snapshots of facebook posts in a public forum are used in accordance with Title 17 U.S.C. Section 107, commonly known as “fair use law”. This material is distributed without profit with the intent to provide commentary, review, education, parody, and increase public health knowledge.

Original post from mother, a woman claiming to be a Registered Nurse who has left her baby unvaccinated and now suspects it has Whooping Cough (pertussis)

Reply from a chiropractor suggesting (according to established medical procedures — see references) every possible wrong treatment for an endangered 3 month old child.