You would think someone with “MD” after her name would know better than to fall for quack medical articles.  Still, I could forgive Kelly Brogan, “Holistic Psychiatrist”, for her mistake in linking “Insulin Can Kill Diabetics; Natural Substances Heal Them”1 on her Facebook page,2 if only she had apologized for her mistake when it was pointed out to her.

Instead, Brogan plows mindlessly on, erasing critical posts, banning users who debunk her, and going on to spread more misinformation like, for example, the HIV virus not being responsible for AIDS,6 and claiming that we need viruses more than vaccines.2 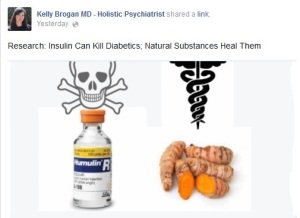 Confirming a lie instead of debunking it–NOT what a doctor should be doing. See footnotes for image credit.

In a future article, I’ll debunk the myth that synthetic insulin is dangerous–and that pig-derived insulin is somehow safer.  In this article, however, I’d like to look at how people like Brogan and her source, “GreenMedInfo”, misrepresent real medical studies to scare the general public.  The study in question is called (hold on to your seats): “Glucose-lowering with exogenous insulin monotherapy in type 2 diabetes: dose association with all-cause mortality, cardiovascular events, and incident cancer.”3

In this study, the researchers didn’t really look at when patients began insulin therapy and how the insulin affected the outcome.  Instead, they used a “proportional hazards model”, a statistical method in which they took a database of Type II diabetes patients from the United Kingdom, assumed synthetic insulin was a hazard, and introduced it mathematically over a designated period of time.

In other words, the researchers had no idea when the patients actually began insulin therapy and whether the insulin was a factor in the hazardous outcomes breathlessly reported by people misquoting and misrepresenting this study.  One thing that’s obviously missing is a control group–in this case, a group that did not receive the synthetic insulin.  The researchers do admit this, but everyone quoting the study ignores the fact.

So, all we really know from this study is that several years after 6,484 people with diabetes received synthetic insulin, some of them got sick, and some of those sick people eventually died.  Well, that’s exactly what you would expect in any population, especially if some of them are seriously ill.  The calculated adjusted hazard ratios in this study (e.g., 1.37 for major adverse/acute cardiovascular events, MACE) could just as easily be explained by pre-existing conditions or other factors.

Answer: Yes.  According to the American Heart Association, CVD is the cause of death in approximately 65% of all diabetes patients.5  All of a sudden, we’re running in circles: did the diabetes cause the CVD, or did the synthetic insulin?  Remember that missing control group?  What about the age of the patients?  What about when they actually began taking the insulin, as opposed the the arbitrary time selected by the researchers?  What about other health conditions?  What about…?

The researchers themselves were aware of the limitations of their study.  The last line of their abstract, missing from every quack article such as GreenMedInfo’s:

An “interventional study” is what I hinted at earlier… it is a carefully controlled experiment involving, among other things, a control group that does not receive the drug (e.g., synthetic insulin) being tested.

There is nothing inherently wrong with an observational study, or statistical analysis.  The authors may very well have a point–maybe more studies are warranted.  I’ll leave that up to doctors.

What I want to point out is that one observational study does not–in any field, in any circumstances–prove a link between one thing and another.  And that is what’s being claimed by Dr. Brogan and everyone else citing this horrific GreenMedInfo article.

5 thoughts on “Debunking the Synthetic Insulin Myth (Part I)”